Nardin Heritage, Memorial Day in Blackwell, and more in a busy weekend 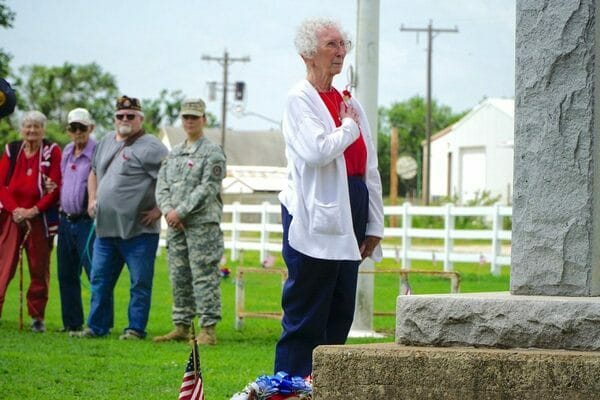 Our nation paid tribute to its greatest heroes on Monday: those who laid down their lives for ours. Memorial Day honors the men and women of the U.S. Armed Forces who died while serving our nation; it’s a time to honor the lives of all people who’ve signed their names on the dotted line.

But it’s important to remember these brave souls more than one day each year.

That was the message Chuck Webb, a member of the Blackwell Veterans of Foreign Wars Post No. 2855, gave to the crowd gathered at the Blackwell Cemetery on Monday morning for the city’s annual Memorial Day ceremony.

The VFW members and the American Legion conducted a wonderful ceremony. But sadly, not many people showed up. To my knowledge, no local elected officials were present. That’s a shame, especially considering that some of them have served in the Armed Forces themselves. When I was a Boy Scout, our troop helped put American flags up and down Main Street to commemorate this important day.

We also helped out at the cemetery. Now that the troop has folded, those duties have fallen upon our local veterans organizations, which have fewer members than they used to. These groups may very well need help with these events going forward, and I think our community can rise to the occasion.

Some folks are busy on Memorial Day with legitimate family obligations. Others think it’s just a day to hang out at the lake, stay home from work and get drunk. To interpret the meaning of this sacred day in such a way is absolutely blasphemous, and I challenge our city’s residents and leaders to do – and be – better. Besides, Memorial Day isn’t enough. We need to remember our nation’s finest every day.

Getting folks together on Memorial Day is tradition, and nobody does it better than Larry Crow and the Friends of Nardin organization. On Saturday, hundreds of people gathered in Nardin for the annual Friends of Nardin Heritage Days event.

This year, a long parade of cars, tractors and horses greeted waving spectators. That fun was followed up by plenty of good home-cooked food, a blacksmith demonstration, an Old West-themed shootout and turtle races, among other activities.

Of course, my favorite part of the show was the tractor pull, orchestrated by longtime Blackwell farmer and mechanic Dorvin Constant.

Tractor pulls are a lot of fun, and if you’ve not yet been to one, you need to check it out. Whichever tractor tows the most weight the farthest before it stops is crowned the winner. Tractors are sorted into various classes by size, leveling the playing field. “I just want to thank everybody that was a part of it,” Constant said. “I want to thank everybody for coming and watching.” Now, let’s shift gears a bit.

NEVER OUT OF REACH

After plenty of delays because of the pandemic and cast members’ health concerns, the second installment of one of America’s most iconic movies is finally in theaters. As perhaps one of the best patriotic movies ever made, “Top Gun: Maverick” drew a large crowds over the holiday weekend. “Maverick” was easily the greatest movie I’ve seen in years. I’ll not extoll its virtues in this column; that’sthe job of my friend and colleague Charles Gerian, who is an excellent entertainment reporter and reviewer.

My family and I went to watch the movie Sunday at the Cowley Cinema 8 in Winfield, Kansas. It’s a pleasant venue, much cleaner than most movie theaters.

Its also the only one relatively close to Blackwell. Aside from Winfield, the nearest theaters are in Wellington, Kansas; Wichita, Kansas; Stillwater, Oklahoma.

Ponca City and Enid’s theaters have shut down. The Winfield theaters are likable not only because it's clean, but also because most cell phones lose signal inside. That significantly reduces the chance that someone's phone will buzz and ruin a quiet scene.

As I was walking from the lobby to the auditorium,I noticed the “No Signal” icon pop up on my phone.

When our phones lose signal, or we’re far away from other people, we may feel like we’re totally disconnected from everyone and everything.

In that moment, however, I couldn’t help but think about someone who never leaves us and never forsakes us.

Whether we have cell reception or not, Jesus is always with us, and we can always call Him up. We can have a dead cell phone but be alive in His presence; we can be away from all other people and still be near Him. If you need someone today, call upon His name. He's quiet, and we can’t see Him, but we know He’s there for us. That’s all for this week, folks.