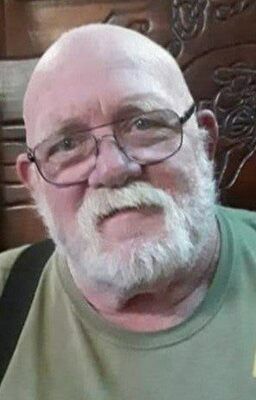 Tom was born in Miami-Dade, Florida to Juanita “Barbara” Seabolt and Collis Vernon Collins.  He was raised in Garden Grove, California by Barbara and Raymond Hampton.  Tom went to Santiago Schools in Orange County.  In high school he acquired his love of cooking through a chef class.  He would carry this passion throughout life.  One of his proudest memories was him and his dad coaching his sisters Softball Teams to Championships.  After graduating, Tom served in the US ARMY, stationed in Germany.

After the service, Tom was back in California where he met and married Janis Hales.  They had a son together, James David Hampton.  They moved from CA, living in Garden City, KS and Ponca City, OK where Tom and Jan worked for the American Legion Children’s Home.  Tom was instrumental in the Children’s Home, opening up a Popcorn Store on 14th Street.  Tom and Jan divorced years later and son James lived in S. Coffeyville, OK.

In 2000, he met his wife, Shannon Hampton, they would spend the rest of his life building beautiful memories. Tom raised Shannon’s three children with her and loved them as his own.  Tom enjoyed playing softball, dancing, karaoke, figure 8 car racing, riding motorcycles and side x sides.  He lived life with love of family and many friends.  He made life long connections with people he met all along the way.  He was generous with his time, love, laughter, and many jokes.

Tom worked at Smith Tool, John Deere, Ditch Witch, Ashbury Machine, HMT, Casino Security, as well as Windmill Security part time after he retired.  When he retired he and Shannon started Boonies Recreation, LLC.  They have hosted Biker Breakfast in the Boonies for 6 years.  Tom had a dream to have live music on the property that they have been slowly improving. He also wanted to provide river guide service by kayak.  They enjoy the camaraderie of the biker community and were members of Three Sands Riders and past members of ABATE of Oklahoma and supported the Share the Road program.

Tom is proceeded in death by both fathers, his mother, sisters, Cindy and Frieda, as well as his brother Larry.

Memorial celebration will be held Saturday June 18th at their residence N.W. of Braman with Military Honors and service beginning at 6pm, followed by a pot luck dinner, music and karaoke.  Guests are asked to park in the west pasture.

A memorial fund has been set up at Bank First 101 N Main, Blackwell, OK 74631 under TOM HAMPTON BOONIES STAGE MEMORIAL.

Instead of flowers, donations may be made to Flagpoles Honoring Our Veterans (FB PayPal or P.O. Box 1185, Mustang, Ok 73064.