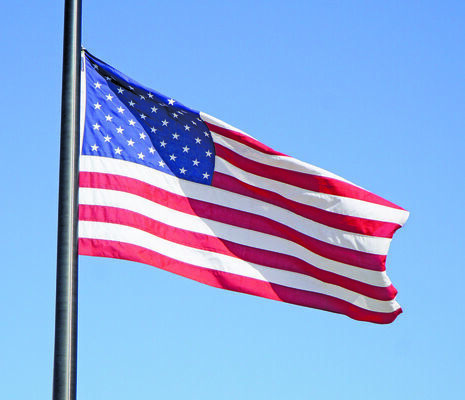 This world is filled with beautiful colors – and the most beautiful will always be red, white and blue.

Tuesday was Flag Day, an annual holiday commemorating Old Glory, the flag of the greatest nation on Earth. Often overlooked, this holiday is still important, and its humble beginnings are worth mentioning.

The holiday was started by a Wisconsin school teacher and his students in the late 1800s. The story goes that Bernard J. Cigrand “began a lifelong crusade on June 14, 1885 to honor the adoption of the Stars and Stripes by the Continental Congress on June 14, 1777.”

In their one-room schoolhouse in Ozaukee County, Wisconsin, he and his students had a little celebration, and it grew from there. The county’s official website tells the rest of the story:

“Thirty-one years later in 1916, his devotion to the Flag was rewarded when June 14 was declared as National Flag Day by President Woodrow Wilson, who said: “The Flag has vindicated its right to be honored by all nations of the world and feared by none who do righteousness.” In 1949, long after Dr. Cigrand's death, Congress and the President of the United States proclaimed the Flag would be displayed on all government buildings on June 14 and asked the American people to join in the observance of the Flag's anniversary.”

Today, people are still carrying on Cigrand’s mission. The National Flag Day Foundation, also based in Wisconsin, aims “to teach Americanism and the lessons of our great Flag and country by enlisting the help of 4H groups, the American Legion, VFW chapters, Scouts, and other patriots,” according to its official website. The organization conducts an essay contest and hosts other events for students to get involved in.

None of us has to be a part of any organization to celebrate our nation’s colors – and we can display them every day of the year. Celebrating the flag is as simple as running to the store, picking up a flag and posting it in the front yard – when the weather and conditions are proper, of course.

Here are some basic guidelines for flag-flying, according to the United States Code:

1. Never fly the flag in inclement weather.
2. If you’re flying the flag at night, it needs to have a light shining on it.
3. Fly the flag at half-staff during times of mourning. (The proper term is half-staff; half-mast is only onboard ships.)
4. Never let the flag touch the ground.
5. When storing flags, fold them properly in a triangular shape.

When flags need to be retired, don’t just toss them in the trash. Flags need to be disposed of with dignity. Some local veterans groups and other organizations will even retire flags for you; all you have to do is drop them off at the organization’s headquarters.

WHAT MAKES UP THE FLAG

Most of us know that the 50 stars on the flag represent the 50 states. But what’s the meaning of the colors?

Ordinary folks can order a flag that has flown in the nation’s capitol, according to www.usa.gov. To do so, U.S. citizens should contact their U.S. senator’s office. Requests for flags are handed over to the Architects of the Capitol group, which processes more than 100,000 flag requests annually, according to its website. Each flag comes with a certificate of authenticity that it flew over the Capitol.

The American flag has a beautiful and fascinating history, and I’d encourage you to check out more about it online. Of course, the most important fact to remember is that it represents the greatest nation in the world. Men and women have fought and died for it, and we should respect and cherish this powerful symbol of freedom every day.

Red, white and blue will always be the best three colors in the world. God bless America!