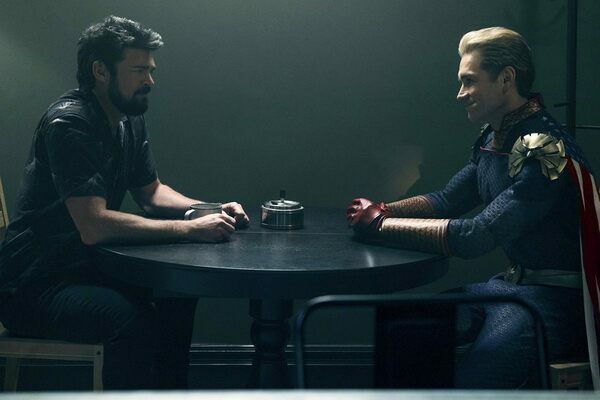 “The whole point of what we do- the whole god damn point- is that no one should have that kind of power.”

THE BOYS, Amazon Prime’s raunchy take-down of the superhero genre, has been making leaps and bounds over itself in the last 5 weeks. The consistent quality has catapulted this series into a league of expertise that, years ago in season 1, would have been a pipe dream.

For those not up to speed, THE BOYS is adapted from the Garth Ennis comic book that ran from 2006 – 2012 depicting a world where superheroes are very much real and very much awful, and at the center of this is “The Seven”, a superhero team owned and operated by the shady Vought Corporation. At the head of The Seven is Homelander, a maniacal tyrant likened to Superman.

On the outside he’s America’s golden boy- blonde hair, blue eyes, an American flag for a cape. On the inside, behind closed doors, he is a tyrannical psychopath that could (and likely will) come unhinged at any moment.

That’s where our “heroes” come in. After Hughie Campbell’s girlfriend is murdered as collateral damage by The Seven’s speedster, A-Train (think The Flash) Hughie is recruited by the titular Boys, a vigilante group lead by Billy Butcher, aiming to bring down “Supes” any way they can.

Developed as a TV series by Eric Kripke, the creator of acclaimed TV goliath “Supernatural”, as well as a comedy trio consisting of Seth Rogan, Evan Goldberg, and Neal H. Moritz the series debuted on Amazon Prime in 2019.

While the series is based on a highly X-rated and graphic comic book, the TV adaptation side-steps most of the mean-spirited depravity to present a more manageable and emotionally driven satire of the ever-booming world of superhero media. That isn’t to say the series is kid-friendly by any means.

Seasons 1 and 2 of THE BOYS has lead- thanks to showrunner Kripke’s long-term world building credit with “Supernatural”-to assembling all of the key players over the past two seasons to give us a world that is absolutely engrossing (and often gross) to behold as now, in Season 3, the stakes are higher than ever and the morals are now as gray as ash.

The series poster boy, Hughie Campbell (played by Dennis Quaid’s son Jack Quaid) was always the doe-eyed and optimistic foil to Billy Butcher’s (Karl Urban) deep-seeded hatred and mistrust of supes or people in general. Now, realizing that “the game is rigged”, Hughie is slowly becoming more like Butcher the less he cares for the rules of warfare.

M.M. or Mother’s Milk (Laz Alonso) was Butcher’s “brains” in their group, and now his personal stake in the mission of taming the long-lost supe Soldier Boy (Jensen Ackles) is costing him his confidence and his unwavering calm.

Meanwhile, the series’ secondary love story between rascal Frenchie (Tomer Capone) and the group’s mute super-powered associate Kimiko (Karen Fukuhara) has seen the womanizing and mission-focused Frenchie go soft and doubt Butcher’s leadership as he feels more and more like running away with Kimiko and leaving their blood-soaked antics behind.

The real star here, of course, is the series chief antagonist Homelander, played by Antony Starr of “Banshee” fame. Starr commands the screen, and has since Season 1. His lifeless eyes, his mannerisms, always show us that while Homelander might be the outwardly perfect hero of the U.S., his mind is completely broken. He is a walking WMD, capable of killing nearly everything in his wake, and the loss of the two anchors he had has caused almost irreparable damage.

There were glimpses early on in the series that maybe- MAYBE- he was a redeemable figure. Now, there is nothing left. While still being absolutely evil, there is still some complexity in that villainy that makes him engaging.

All of this to say that the two seasons leading up to now have set the stage for an explosive and inevitable heartbreaking finale that is to come.

THE BOYS is a superhero satire that doesn’t shy away from ripped-from-the-headlines commentary, taking down both sides of the political spectrum on hot-button issues. But beneath the comedy, blood, and guts, these are good characters brought to life by great performers.

You want to believe these people can be good, and the series baits you along with some, which makes their black hearts all the more cold when you think you’ve finally reached the bottom of their depravity.

Season 3’s introduction of Soldier Boy, a Captain America / Winter Soldier parody that was captured by Soviets at the height of the Cold War, is brought to life with intense passion and presence by Ackles,one of the “Supernatural” lead acts in what might be his meatiest role yet.

THE BOYS is now streaming on Amazon Prime.