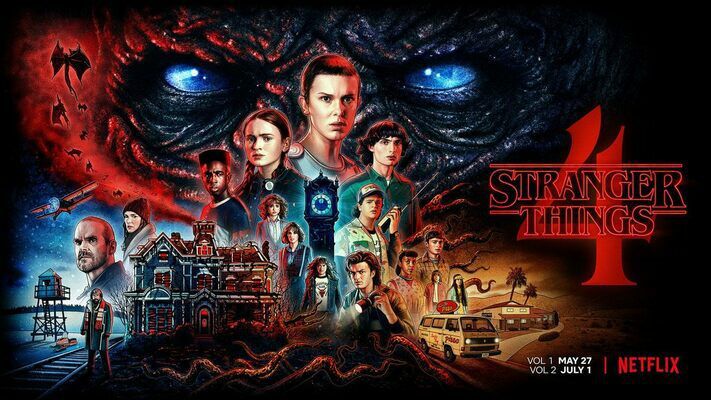 “There are some things worse than ghosts.”

It’s hard to fathom how much of a cultural phenomenon Netflix’s “Stranger Things” is as it is ramping up for its Season 4 finale next week, set to debut July 1.

The 80’s nostalgia series, a sci-fi adventure drama in the vein of Spielberg and Stephen King, is everywhere right now.

No doubt you’ve noticed the revival of Kate Bush’s “Running Up That Hill” everywhere from major radio stations to TikTok, or you’ve probably seen the “Mind Flayer” Dominos Pizza advertisements on TV.

It’s a legitimate sensation, going back to the old saying that “everything old is new again”.

The series is steeped in nostalgia for the time period it is set in, the 1980s, much like how our cinemas have had heydays capitalizing on our parent’s youth: Ghostbusters is back and made gangbusters in an emerging post-pandemic theatrical market, Top Gun is on it’s way to becoming the highest-grossing domestic film in history, Jurassic Park is roaring through the box office, Star Wars is bigger than ever. Elvis is back in the building. The list goes on.

“Stranger Things” began in 2016 in Netflix’s relative infancy, back when their business preferred quality over quantity rather than in the last few years where the streaming service dumps hundreds of shows and movies a month, only for them to get jumbled together in the service’s algorithm, equating them to being nothing more than the $5 bargain bin of content from Walmart.

Miraculously, the series has preserved and battled through Netflix’s tumultuous desire to seemingly make everything with their stamp on it look as cheap and inoffensive as possible.

It is, next to “The Crown”, the only consistent item of genuine quality and craftsmanship that the provider can brag about.

The series definitely had some extra fun money this season, and the cinematography and camera work is well worth the money. It looks fantastic, truly.

This season, our heroes have been divided- Joyce Byers and her plucky conspiracy nut friend Murray go to Russia to find Hopper, displaced by the Upside Down portal at the end of Season 3. Mike, Will, and Jonathan race to find a recaptured Eleven who has been struggling to regain her powers. Dustin, Lucas, Robin, Nancy, and Steve find themselves running across Hawkins to stop a murderous spirit.

It’s all kind of a mess, in the most fun way. This season did have a bit more of growing pain, I thought, compared to the last few seasons especially with trying to force characters like the token stoner Argyle (not as funny as the show thinks he is) while not giving nearly enough credit to genre icons portraying nuanced characters like Paul Reiser’s Dr. Owens or Matthew Modine’s unsettling (but well developed) Dr. Brenner.

Not to say the new additions this season are bad. Eddie Munson, played by Joseph Quinn, is spectacular and his chemistry with everyone he shares a scene with is electrifying. An early scene in Episode 1 has him sharing the screen with the doomed Chrissy and the acting is wonderful. It genuinely makes you fall in love with them and makes her fate all the more tragic to behold.

Same to Jamie Campbell Bower, a fantastic actor who has not has his fair shake despite delivering a weighty, heartbreaking, and nuanced turn as the Earl of Oxford in the 2011 Shakespeare drama ANONYMOUS as well as turns in Starz ill-fated “CAMELOT” drama.

This season, he is a seemingly innocent orderly and pulls double-duty under heavy prosthetics as the big-bad, Vecna. He steals the show, and I am grateful for his turn here because the man deserves so much more than the roles he’s been getting. He is terrifying.

The more sluggish moments in the early season, mostly centered around the dead-weight characters like Will and Lucas, are very much excused by the time we get to the mid-season finale with Eleven and Campbell Bower’s villainous Orderly in the Rainbow Room, a scene that builds off of the iconic massacre from AKIRA and is shot (and scored) as an homage to Zack Snyder’s 2009 film WATCHMEN.

It’s probably the best episode of the series so far, and that’s saying something.

Season 4 is much more horror focused than the past three seasons, which borrowed more from the aforementioned nostalgic adventures of Spielberg and King. This season, however, dives into territory marked by names such as Wes Craven, John Carpenter, and films such as THE GATE (1987) and SILENCE OF THE LAMBS (1991).

You know you’re not watching the same cuddly “kids on bikes” series you’ve grown used to when the season opens with the dead, mangled, bodies of children sprawled across a laboratory. It was so startling that, in light of the Texas shooting, Netflix added a disclaimer at the start of the show.

The pieces on the board are all assembled as our heroes converge on Hawkins for what could be the final battle between good and evil as Eleven aims to settle her unfinished business with Vecna.

Let the bodies hit the floor.

Trailer for HBO's The Last of Us: Hank Williams...