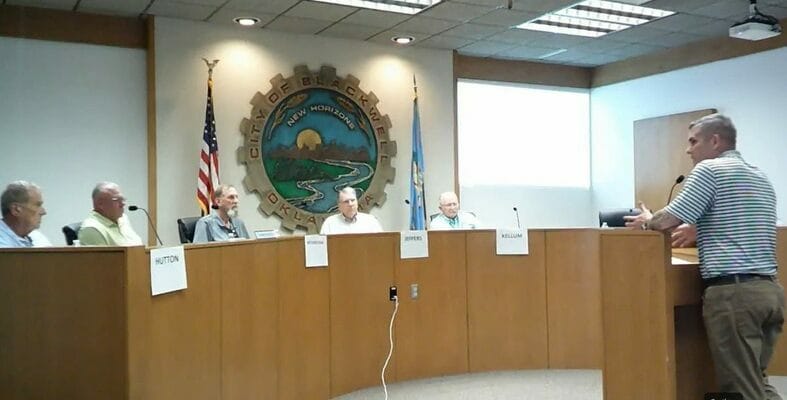 The subject of a proposed duplex housing development at the site of the former Huston School between Russell Avenue, 2nd Street and Vinnedge Avenue was the topic of intense conversation Thursday night at Blackwell City Hall during the Planning Commission and subsequent City Council meeting.

The planning commission voted against a change in zoning that would allow the development to take place, but the City Council later rejected the vote, approving the change so the development can occur.

Wieland said the former school sits dormant, in part, because the lead and asbestos in the building makes it “very difficult and expensive” to demolish.

For comparison, Wieland said Northside School, which was torn down around 2010 to the tune of $327,000, was a “small” school. Wieland said the City of Blackwell is in a grant request process with the State of Oklahoma to receive aid with asbestos abatement for Huston School.

“What we’ve been presented with is an opportunity to develop the west side of that property, the playground side, into duplexes from Freedom Homes, who are currently in town building the homes on the north side of town,” Wieland said.

The decision to build duplexes came from studies showing the average consumer is more interested in renting than buying a home.

“I’ve heard some people have concerns that they’ll be ‘low-income housing’ or ‘Section Eight housing,’ or that ‘the developer will sell them,’ but the price and cost of building these duplexes for the developer would mean they’d lose a ton of money going that route.

“This is an opportunity for Blackwell to develop new rental properties. I understand the concerns. Nobody likes change. We’ve been down this road already. I myself understand that. The Grand Lake Mental Health clinic was supposed to go into the Huston property, and it now sits right behind my house, so I understand change is difficult. I understand new businesses and properties can be challenging for neighborhoods. I understand and respect that.”

Jeffers spoke first, saying people have lived in the area near the school for years, and that the residents are all in single-family homes.

“Now we’re going to put in duplexes, rentals, that you’d have people in-and-out, which will change the perspective of that community,” Jeffers said. “You have a nice, quiet community, and now you’re going to put duplexes in there.”

Wieland said some of the same concerns were addressed by the community around the Doolin Avenue development. He also mentioned that turn-over rates would depend on the span of the rental agreement that Freedom Homes has with its tenants.

Jeffers countered, asking why the development couldn’t go into the empty field west of the hospital, which is near a neighborhood of duplexes.

Husted replied to Jeffers, saying such a proposal would not be cost-effective. The land is undeveloped and would require sewer lines, water lines, electrical lines, streets, sidewalks and more to make it feasible for housing.

Husted said the area near the field was once single-family housing, and that it has changed over the last 30 to 40 years, as most neighborhoods do over time.

“That’s an entirely different area [by the elementary school] than it is [by Huston],” Jeffers replied.

Husted said the letters the City of Blackwell received in protest to the proposed development contained “emotional” rather than practical concerns. Writers said their children play in the park at the school.

“A city-wide concern would be asking if these were going to lower property value,” he added. “They’re not. We’ve talked to the assessor about this.”

Hutton spoke next. When he talked to people in the area, their concern was that the duplexes would not be maintained “inside and outside,” he said.

Wieland assured him that, in the rental agreement between Freedom Homes and their tenants, lawn-care and appearances would be taken care of by Freedom. As for the inside, Wieland stated he nor the city can control that, as evidenced by the controversy over City Ordinance No. 2809 from several years ago.

Freedom Homes developer Jimbo Carnley, who was in attendance, said the company has strict guidelines in place to preserve the duplex homes and keep them presentable. The company can control what the duplexes look like, but no one can control how the single-family homes in that area look.

To dispel “Section Eight housing” rumors, Carnley said such a development would not make sense from a business standpoint and would cost the company millions of dollars. In Freedom Homes’ vast multi-state catalog of properties, not one of them is a “Section Eight” assisted living home.

That has never been in the cards for the company because it would need several special licenses and other certifications to offer that, he said.

“Our core demographic is young families, young professionals, teachers, traveling nurses, or at the opposite end of that is people 55 and over who are downsizing and looking for something smaller and more quiet, easy to maintain,” said Carnley, who added that teaching and nursing are nomadic professions that often bring outsiders to a new area.

Because no new housing developments have been built in Blackwell since the 1970s, new employees for the school district or the hospital are often struggling to find decent places to live in town.

Carnley also said one of the unsold homes on the Doolin development was listed as a rental to “test the waters,” and it had 14 applicants. Of the 14, eight qualified to rent, and of those eight applicants, six were from Ponca City. The applicants were looking to move to Blackwell for better schools and quality of life, stressing that there is an interest in people seeking to live in Blackwell.

As for the inside of the homes, Carnley said the company does routine maintenance to air conditioning vent units, which gives them a peace of mind about how the tenants are taking care of the property. Also, the company is strict regarding pets.

Despite that, Kellum asked Wieland what percentage of Blackwell families qualify for Section Eight housing.

“I can’t answer that question for you,” Wieland said, “because it has no bearing on this topic, so I didn’t think to provide that.”

“Yes, it does,” Kellum argued, insisting that, if the houses are empty, they will go to Section Eight housing.

Carnley restated that there are “no coupons” for Section Eight housing, nor does Freedom Homes have any in its portfolio.

Kellum said that, by looking around Blackwell, he doesn’t see any new jobs or opportunities, and that people would not have the means to afford duplexes for $1,500 per month. Carnley said the duplexes were being priced at $1,250.

Kellum then asked Wieland how many “Section Eight families” are in Blackwell that have children getting free or reduced lunches and whose families are on food stamps.

City Attorney Bryce Kennedy interrupted the back-and-forth, saying all the planning commission was being asked to do was change the zoning of the neighborhood from single-family to a larger dwelling with two doors.

“What you’re being presented is a $1.25 million investment into housing within our community,” Kennedy said. “You have to think down the line.”

Once both phases of the project are complete, the development would offer 16 duplexes once Huston School was demolished, with eight on each side of the road.

In attendance was Chad Shepherd, a resident of the neighborhood and a member of the Blackwell City Council.

“I’m fine with houses,” Shepherd said. “But like you, I don’t think anyone would want duplexes right across the street.”

Carnley asked why people had negative perceptions about duplexes. Shepherd replied that one would just have to look at the neighborhood out by the elementary school, stating that the homes and duplexes there are not mowed or cleaned, and that they do not look nice.

Carnley replied that half of the homes in any town are in the same condition, even single-family homes.

Speaking to the topic of jobs and needs, Carnley equated it to a “chicken-and-egg” scenario. Blackwell can’t bring in business if it doesn’t have homes for workers to live in, but the city need businesses and people to buy homes.

“What’s the negative impact of a duplex?” Carnley asked again. “There isn’t one. There’s the negative perception that it’s a rental. You could drive down any block, and probably a fair amount of people are renting their homes.”

Shepherd asked if Carnley had a duplex across from his house. Carnley said he does not because he lives in the country.

“The people that live in duplexes are just as good as you and I,” Carnley said. “They’re not in poverty. They’re just people looking for a place to live.”

Shepherd then asked why the duplexes can’t just be houses. Carnley replied that the decision comes down to economics, and that selling houses is harder than selling duplexes.

“We’re building a large duplex with a garage,” Carnley said. “We’re larger, from a living standpoint, than most single-family houses are.”

Mayor T.J. Greenfield, who was in attendance, spoke up. Shepherd asked if Greenfield would want duplexes across the street from his home. Greenfield replied that he wouldn’t mind.

“To me, this is being judgmental solely because these are duplexes,” Greenfield said.

Shepherd argued that the development posed an issue with traffic flow, and that cars from the duplexes would clog the roads.

Carnley replied that Huston was a school for fourth and fifth grade students fewer than 10 years ago, which would have meant many cars were parked in the area. The traffic that came from rental home owners would be minimal compared to the daily traffic of a school site in a residential neighborhood.

Carnley said that, if Freedom Homes ever did sell the properties, strict covenants would be in place: The property would be maintained and kept nice just as Freedom Homes plans to do, he said.

“Who enforces that?” Shepherd asked. He was told it would be the new owners and the City of Blackwell’s Code Enforcement workers.

Shepherd replied that, if that was the case, “[enforcement] wouldn’t happen.”

“Who’s maintaining your neighbor’s yard, making sure that looks nice?” Carnley asked Shepherd. “I’d rather have a property that I know is going to get mowed and landscaped regularly,” he said, speaking to Freedom Homes and its agreement with renters that the company would provide upkeep.

Ultimately, the planning commission voted 4-1 to leave the zoning as-is and not give its recommendation to the City Council. The Council, however, later rejected the vote and approved the change.