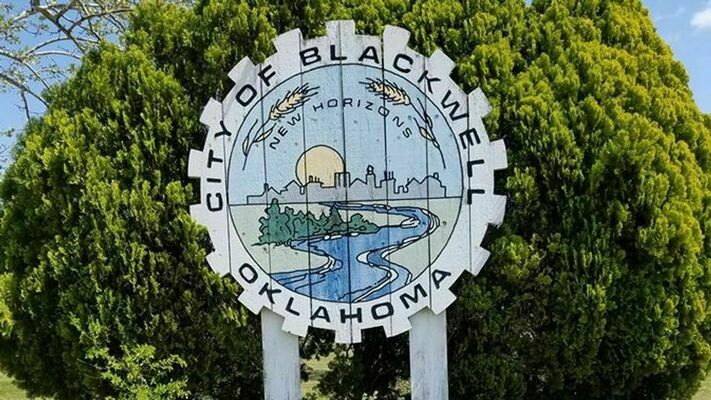 The Blackwell City Council met Thursday to take action on bringing an unnamed retail store to Blackwell and to address the summer heat’s impact on city operations.

The night began with a meeting of the Planning Commission, which deferred the final plat of the Freedom Homes housing addition at the former Huston School site to the Council at 6 p.m., the Council meeting began with a special report from Jim Hoos, the City of Blackwell’s water department manager.

Hoos said that, despite brutal heat and drought conditions across the Midwest, the city's water reservoir is still well within a safe limit.

“We watch it daily, and it is a top priority for us,” Hoos said. “We’re in really good shape unless we enter an extended period of drought. That could possibly change our status.”

“The 45-day outlook is grim,” City Manager Jerry Wieland told the Council. “But we will notify the public as soon as anything changes, and we will continue to keep everyone informed.”

Melissa Hudson with the Top of Oklahoma Museum then spoke to the Council about the 16 new windows that have been installed at the museum. She urged residents to check out the museum, which has new carpeting, lighting and displays.

After hearing reports, the Council voted to seek bids for an automated electric and water meter system, with bids to be received by Sept. 6.

The City of Blackwell provides service through 2,974 water meters and 3,445 electric meters. When implemented, the fully automatic system will eliminate meter-reading by city personnel, and the data will be transmitted directly to City Hall.

The proposed automatic system will “significantly improve” the quality and quantity of meter-reading.

Next, the Council approved the final plat of the Patriot Square housing development at the former Huston School site. The development will begin with up to four duplexes on the western portion of the property.

Each will be 1,100 square feet, with a one-car garage on each side of the duplex as well as a two-car driveway. The final plat allows for 15 lots.

The City of Blackwell has secured a grant to remove lead and asbestos from the former school structure in order to demolish it. The grant was secured by city employee Cindy Gaddis, whom Wieland praised for her work. The original plan was for five duplexes to be built, but it was amended to keep the site’s park area, which the City of Blackwell will maintain.

The Council then spoke to Sherry Buellesfeld, the development representative for Blackwell Tourism, about a mural to be drawn at City Hall.

The mural, which will be on the northeast wall of City Hall, will be the City of Blackwell’s logo. The mural is being paid for by Blackwell Tourism, keeping in line with the organization’s dedication to artistic works within the city. Recently, the group was responsible for the American flag barn quilt at the Co-Op on Main Street.

The Blackwell City Council then apportioned $15,000 from the city’s lodging tax to be used for the Top of OK Jamboree on Oct. 8. The funds will be used to pay the concert organizers to provide services at the concert, including the preparation and cleanup of Morgan Field. The last item on the agenda for the night was an executive session to entice a “large retail business” to come to Blackwell.