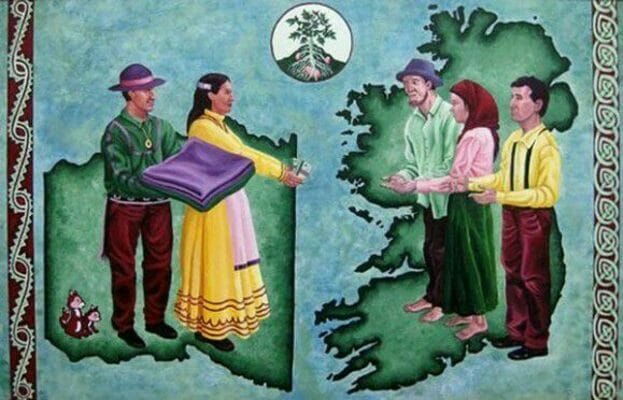 Their prosperous natural land pillaged and raped by invading forces. The bright embers of their culture stomped out. Their language ripped from their tongues. Their lords and chieftains were stripped of power and titles. Their gods and deities were erased. Promises made only to be broken.

You might correctly assume I’m talking about the Native Americans, but you might also be surprised to realize that this applies to the Irish as well.

The people of Ireland and the Native Americans share a bond, deepened by generations of shared trauma through genocide, war, and cultural erasure.

Chances are, if you can trace Irish in your genealogy, it probably came to Oklahoma through the Trail of Tears...and possibly long, long, before that.

According to the Oklahoma Historical Society (OHS), the presence of many first and second-generation Irish (and Scots-Irish) in Oklahoma can be traced as part of the federal relocation of American Indians, especially the Five Tribes.

“Many of the mixed-blood members of the groups that moved to Indian Territory in the early-to-mid-nineteenth century had an Irish parent or spouse,” said the OHS

In the early 1800s, Irish trappers and traders settled in what would become Oklahoma.

Some US Army personnel stationed at frontier forts of Indian Territory were also of Irish descent.

Irish settlers, at the time of statehood, accounted for over 10% of Oklahoma’s foreign-born residents.

The Irish also came to the midwest in droves following the construction of the railroad- specifically John Scullin’s “Irish Brigade”, helping to establish the lines for the MK&T Railway Company.

Of all the blank spaces on the map waiting to be filled after the land run, Kay County found itself home to an Irish population that was determined to be twice the size of any other part of the state.

While the history and lore of nearby Ponca City is overshadowed by the controversial tycoon E.W. Marland, an Irish immigrant named James McGraw lorded over a financial empire that included Ponca’s First National Bank and a prominent grocery store.

Those words come from the Choctaw Nation’s history page on their website, and couldn’t seem to be more true.

But how did this all start?

In an essay titled “The Red and Green Problem Peoples”, we are told by Michael Taylor at the University of Mary in North Dakota that the Irish and Natives bonded through their aforementioned cultural trauma.

The British attempted to “tame” the wild Irish just as the U.S. Government attempted to snuff the “wild” out of the Natives.

The Irish-Native bond actually began in the late 1400’s in the areas that would become Georgia and the Carolinas. The vikings, who landed in North America long before Columbus, described the Irish people as able seamen who were adept at travel.

The Vikings also claimed that the Irish occupied an area south of the Chesapeake Bay called Hvitramamaland, meaning “Land of the White Men.

Records from various Native American tribes describe the colony of “Duhare”, which is Gaelic for “Place of the Irish”. The Irish shared with local Native tribes in terms of customs, culture, food, and supplies. Duhare, apparently, was also home to the giants.

The Natives, as far west into North America as Nevada, describe roaming tribes of painted giants- White complected with red hair and green or blue eyes. The Irish were substantially larger than the population of the tribes, and their legend as “giants” was perpetuated the Spanish and European explorers who would soon land in North America.

The Natives and Irish intermingled, of course, and intermarried. So it should come as no surprise that by the 1800’s when the Natives were forcefully relocated westward, their Irish kin followed them.

When the “Great Famine” or Potato Famine spread through Ireland in the 1840’s with apocalyptic results that mirrored the Trail of Tears, the Choctaw People collected $170 dollars to send to the Emerald Isle for relief. A paltry sum today, but at that time the $170 dollars was the equivalent of roughly $5,000. That money was sent to one of the most afflicted areas in Midleton in County Cork, just south of Dublin.

Flashing forward to the 1995, Irish President Mary Robinson visited the Choctaw Nation to officially thank them for their aid during the Famine. In 2017, a sculpture was erected titled “Kindred Spirits” that recognized the Choctaw contribution to relieving Ireland’s woes.

In 2020, to repay the kindness of the Native Americans, the people of Ireland raised over $820,000 to assist the ravaged Hopi and Navajo Reservations in Utah, Arizona, and New Mexico where the fledgling pandemic was devastating communities.

The Irish and Native American cultures also share a startling similarity when it comes to some of their mythology as well. It is likely that several stories we hear today are amalgamations of these two peoples’ long, storied, history together.

Anyone with a passing familiarity to Native American folklore has probably heard of the “Little People”, These mischievous (if not nefarious) creatures are said to partake in mischief and, in some cases, taking children. They share similarities with the leprechaun of Irish folklore and the faeries themselves.

Is it possible they were brought to North America with the Irish? As almost every culture has their own version of “little people” it is tough, if not impossible, to trace them back to Ireland.

“Shadow people” are another type of creature, although more sinister than the aforementioned “Little People”. The Choctaw tell of “Nalusa Falaya”, a spindly black shadow creature said to haunt (and protect) the woods from hunters. This is similar somewhat to the Irish-Gaelic Bodach.

The ever-popular Deer Woman, a staple of Native American culture, is a creature with the torso of a woman and the lower half of a deer who exists to lure lecherous and unfaithful men to their doom. The Irish have the story of a “Deer Goddess” called Sadhbh, a beautiful woman who rejected a dark Druid that attempted to rape her. The Druid cast a spell on Sadhbh, transforming her into a deer.

She is a cautionary tale of man’s sexual aggression but appears less hostile in legend than the Deer Woman. Our antlered beauty of Native myth would, actually, find more in common with the ancient sirens – half fish, half woman- who lured invading sailors to their doom at sea.

While this is pure conjecture, it is curious that almost all of these mythological creatures seem to exist in every country and culture the world over. Maybe the Irish brought some magic from their own ancient lands with them over the ocean? Or maybe the Native American, living among these spirits and legends for so long, didn’t pay any mind to what lurked across the sea.

We will probably never know...but if they believed the things lurking out there in the dark, shouldn’t you?

HBO's House of the Dragon weaponizes sex in twi...