The Untold Story of a Nardin MLB Legend: Les Layton 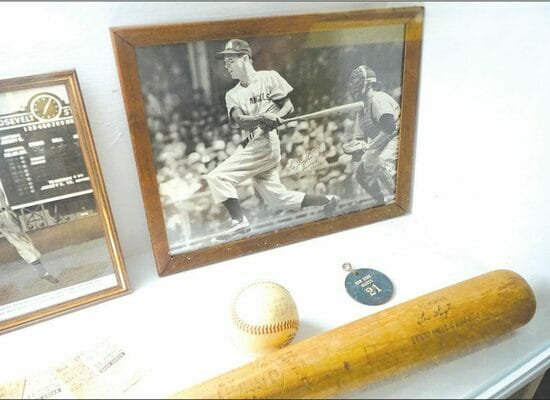 Some baseball fans across the United States know how Les Layton’s career ended.

After exiting the major leagues in the 1940s, the outfielder and pinch-hitter quietly played a few seasons in the minor leagues before getting a job in the aircraft industry.

But few know how it began: playing baseball in his hometown of Nardin, a tiny community in western Kay County. Layton is one of a handful of 20th century baseball players to hit a home-run during his first at-bat in the major leagues.

His baseball record makes him one of Kay County’s most famous sons. With a baseball team set to start in Blackwell in the spring – the Blackwell Flycatchers, a division of the Pecos League – some may ponder whether Kay County will one day have another professional baseball player.

For that answer, folks will have to wait and see. But whether Kay County ever has another major-leaguer or not, Layton’s place in national baseball history will remain. The place where that history began, and is preserved today, is Nardin. “He was a tremendous athlete, and he was a great person,” Nardin historian Larry Crow said. “We should be very proud of him.”

A STAR IS BORN

Crow, who organizes the town’s annual heritage celebration, lives on Memory Lane – literally. That’s the name of the street where sits his century-old white wooden home. It’s not only the place where he houses volumes of Nardin lore – it’s a place where history was made. Crow lives in the home where Layton was born on Nov. 18, 1921. The house belonged to Layton’s grandfather, Porter Morris. Layton grew up in Nardin and perhaps found his love for sports there. Nardin had a baseball team that played in a field south of town during the 1930s, and Layton was on the team briefly while he was in the seventh and eighth grade, Crow said. After Layton finished eighth grade, his family moved to Wichita, Kansas, and he played baseball at Wichita North High School.

There, Coach Monk Edwards inspired him to pursue a career as a pro, according to a story in the now-defunct Wichita Beacon newspaper. “Layton’s baseball ability was good enough to gain him a scholarship at Oklahoma University [sic],” wrote Beacon Sports Editor Bob Overaker. Layton played on OU’s team during 1942, but his time on the team was cut short by the onset of World War II. The university canceled its baseball program for three years because of the war, according to a story in The Oklahoman. The team suspension didn’t stop Layton for long. By 1944, he was a member of the Jersey City Giants, a division of the International League.

He had an 11-game hitting streak and became one of the team’s best hitters, Crow wrote in “Nardin, I Knew You When,” an in-depth retelling of the town’s history. Soon, though, the war would put his career on hold once again. He was drafted into the U.S. Navy in July 1945 as the war wound down. He served for about a year and was discharged in 1946, Crow wrote.

BACK IN THE GAME

The 1946 season had already begun by the time Layton was out of the service. But despite his late start, his job with the Jersey City Giants was still waiting for him. That season, he hit 13 home runs – “indicating he still possessed more than a little power,” Crow wrote. One year’s time made a difference. With more games and practice, Layton helped put the Giants on top of the competition in 1947, with the team coming in second place in the league.

Countless newspaper stories chronicled his athletic exploits that year. Coverage of his performance back east even appeared in The Blackwell Journal-Tribune. One such undated newspaper clipping published in Crow’s book reads: “Jersey City fans, accustomed to seeing Layton make better than ordinary catches, had even their eyes opened, when Les made a spectacular running, gloved hand catch of Colman’s drive to the left center in the sixth inning of the second game … Even the Newark fans joined in the ovation to Layton for what was one of the season’s greatest plays.” That play would pale in comparison to what lied in store.

On April 24, 1948, Layton stepped onto the field as an outfielder with the New York Giants. He was finally a major league player. One month later came the biggest moment of his career: his first at-bat. The day was May 21. The Giants were facing the Chicago Cubs, and famed Cub pitcher Johnny Schmitz hurled the ball toward Layton in the 9th inning. Layton swung his bat, and the ball went flying over the left-field roof of the Polo Grounds, the Beacon reported. In that moment, he became the 15th player in National League history to hit a home-run during his first at-bat, and he became only the second pinch-hitter to do so, according to the Baseball Almanac.

Layton talked about the feat in a 2008 interview with Baseball Happenings, telling the outlet: “I can remember it now. They told me to grab a bat, get up there, and hit one, and I did! … I came back in the dugout and nobody said a word.

They didn’t say, ‘Nice going,’ or anything, and then suddenly they all broke out in rapture.” Yet Layton’s first at-bat wasn’t all that defied the odds. “His first four major league hits went for the cycle, all happening in four different parks,” the author of the Baseball Happenings article wrote. “Layton’s first four career hits in order were a home run (New York), a triple (Cincinnati), a double (Pittsburgh) and a single (Chicago).” For that record-setting feat, he was featured in the famed Ripley’s Believe-it-or-Not nationally syndicated newspaper column as the first baseball player in history to score all four hits in his first at-bats as a pinch-hitter. His caricature, donning a hat and jersey with a bat mid-swing, was published in countless newspapers across America.

Despite his success, Layton’s time in the majors was short-lived. The Giants traded him to the Chicago Cubs in 1949, but he ended up on the Cubs’ farm team: the Los Angeles Angels. What happened in Los Angeles was, as Crow wrote, some of Layton’s best playing. He hit 27 homers for the Angels. And in the few years he was there, he became friends with actor and fellow baseball player Chuck Connors, best known for his lead role in the TV series “The Rifleman.” “I spent three years in the Coast League with Los Angeles,” Layton told Baseball Happenings.

“I enjoyed that more than anything else. I got to play every day.” Layton left California sometime around 1954 and returned to Wichita. He hired on with the Boeing aircraft company as an engineer, and he played for the company’s semi-pro baseball team, the Boeing Bombers, according to Baseball Happenings. In 1955, the team won the National Baseball Congress championship. By 1962, he left the field for good, the Beacon reported. “But it was fun – great fun,” Layton told the Beacon.

RETURNING TO HIS ROOTS

Back in Nardin, Crow had heard little, if anything, about Layton. He still doesn’t remember who told him about Nardin’s most athletic son in the early 1980s. But once he found out, Crow wanted to preserve Layton’s story so he could help give Nardin someone to be proud of. Through the years, Crow and Layton talked a few times over the phone. Layton and his wife retired to Scottsdale, Arizona, where Crow once paid him a visit. “He was a very downto-earth guy,” Crow told The Journal-Tribune while sitting in his living room on a recent Monday. “You never felt like he was better than you.” Layton never forgot about his hometown.

In the late 1990s, he attended several Nardin Heritage Day celebrations, which take place each May. When Layton died in 2014, his ashes were buried at the Nardin Cemetery. “He loved Nardin as much as I do,” Crow said.

Crow told Layton’s story throughout “Nardin, I Knew You When,” copies of which are available at local libraries. But his story isn’t all that’s left. In the Nardin Heritage House, the town’s museum, Layton’s engraved Louisville Slugger and Jersey City jersey are on display next to three long, wooden cases containing black and white photographs, yellowed newspaper clippings and other memorabilia from his life and career – both of which started in Kay County. In his book, Crow put it this way:

“Not bad for a kid who got his start playing baseball in the cow pasture south of the Nardin depot.”