"Terror at Tenkiller" and Oklahoma-set horror films for Halloween Season 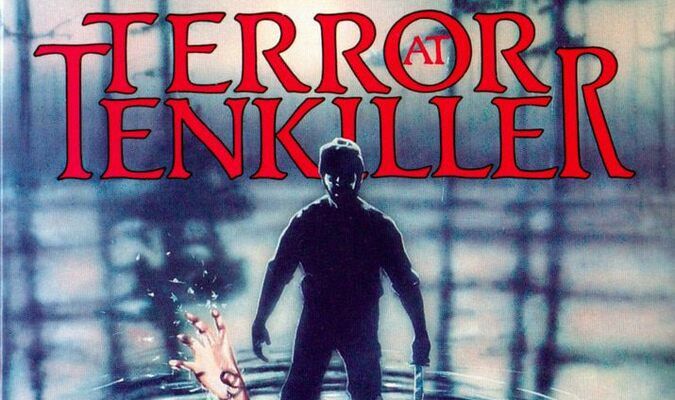 Did you know Oklahoma was the subject of a cheesy 1980’s slasher film?

While state legend suggests that Tenkiller Lake is the home to an octopus, director Ken Meyer and screenwriter Claudia Meyer poise that the lake actually is stalked by a vengeful marina worker named Tor in 1986’s TERROR AT TENKILLER.

The film follows Leslie and Janna, co-eds who go to a summer home on Lake Tenkiller for a summer break and to escape Leslie’s abusive fiance. Murders ensue, of course, as Tor stalks the women and terrorizes Leslie. The film ends with an obvious homage to FRIDAY THE 13TH Part I with Tor jumping out of the water after seemingly being killed by Leslie, reminiscent of Jason lunging from the water at the end of the first “FRIDAY” and grabbing the film’s lead, Alice.

While based at Lake Tenkiller, the film was actually shot in and around Lake Fort Gibson While this sleepy little slasher has largely been forgotten by time, the film was the subject of a a RiffTrax commentary in 2014 done by Mike Nelson, Kevin Murphy, and Bill Corbett of “Mystery Science Theater 3000”.

The film received a home video release in 2004 by VCI Home Video, doubled with 1987’s THE LAST SLUMBER PARTY.

TERROR AT TENKILLER is just one of several scary flicks based in and around Oklahoma.

Another 80’s relic, THE RIPPER, starred Tom Savini, the legendary makeup artist responsible for films like MANIAC, CREEPSHOW, DAWN OF THE DEAD, FRIDAY THE 13TH, and THE TEXAS CHAINSAW MASSACRE PART II. In THE RIPPER a professor at a small town Oklahoma college comes into possession of Jack the Ripper’s ring, allowing the legendary killer’s spirit to possess him and plot a course for mayhem and murder.

The film was shot in Tulsa and the University of Oklahoma.

A more well-known 80’s classic, Kathryn Bigelow’s NEAR DARK starring the late Bill Paxton (also an Oklahoma icon for TWISTER) follows a roaming band of vampire hunters. NEAR DARK takes place in Oklahoma but was filmed in Arizona after a planned shoot in the Sooner State was washed out by rain.

In 1991, Oklahoma hosted the shoot of ALL AMERICAN MURDER starring Christopher Walken.

Artie Logan meets a beautiful college girl and goes on a date with her, only for their date to be ruined by a blowtorch-wielding maniac who murders her and frames Artie. Now racing to stop the killer and clear his name, Artie has to defend himself against a detective out to get him, and a psycho killer.

A L L - A M E R I C A N MURDER takes place in Sand Springs and was filmed at Oklahoma State University in Stillwater.

A newer film, CAMP COLD BROOK, released in 2018 takes place in Oklahoma and was filmed in Oklahoma City, Jones, Guthrie, and Edmond. The film borrows loosely from the grizzly Girl Scout murders at a summer camp where 20 children died of poison and were found dead in a creek nearby, reportedly at the hands of an evil witch.

Their deaths and subsequent haunting are investigated by a ghost hunting team who soon find out their bid for quick ratings ends in a night of hellish terror. That film starred “One Tree Hill” alumn Chad Michael Murray.

What do you think? Have you seen any of these movies? Let us know!