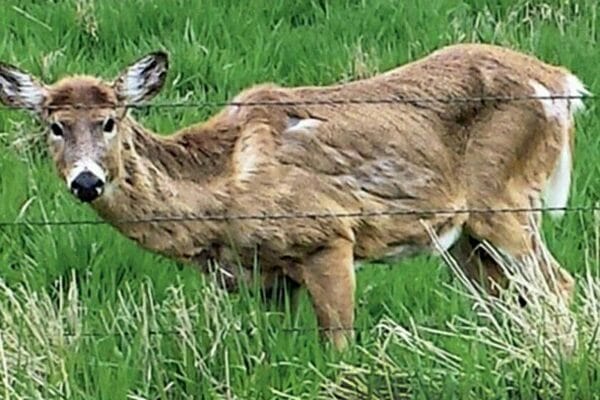 State wildlife officials plan to begin monitoring deer and elk in the Oklahoma Panhandle for a fatal neurological disease.

Commissioners with the Oklahoma Department of Wildlife Conservation passed emergency rules during their October meeting that establish a surveillance area in the western part of the Panhandle after a white-tailed deer carcass in an adjacent Texas county tested positive for chronic wasting disease, officials said.

Although the disease is always fatal for wildlife, transmission of the disease from wild animals to people or livestock has never been documented, officials said.

The news comes roughly two weeks before deer season ramps up across the Sooner State.

Hunters who harvest deer or elk within the region will be required to clean them there. In a news release, wildlife officials said chronic wasting disease is

“an always-fatal neurological disease that affects the brains of deer, elk, moose, and other members of the cervid family, creating holes that resemble those in sponges. It’s important to note in this area of the state that CWD does not affect pronghorn antelope.”

Wildlife officials caution hunters to have their deer and elk carcasses tested before eating them.

However, the Centers for Disease Control and Prevention says there is “no strong evidence for the occurrence of CWD in people, and it is not known if people can get infected with CWD prions,” according to the agency’s website.

No deer with the disease have been found in Oklahoma yet, but two elk herds within the state have tested positive for it. Every state surrounding Oklahoma has detected animals with the disease, officials said. “The Wildlife Department has conducted CWD monitoring on hunter-harvested deer and elk and road-killed deer since 1999,” officials said.

“The disease has not been detected in laboratory testing of tissue samples from more than 10,000 wild deer and elk from throughout Oklahoma.”