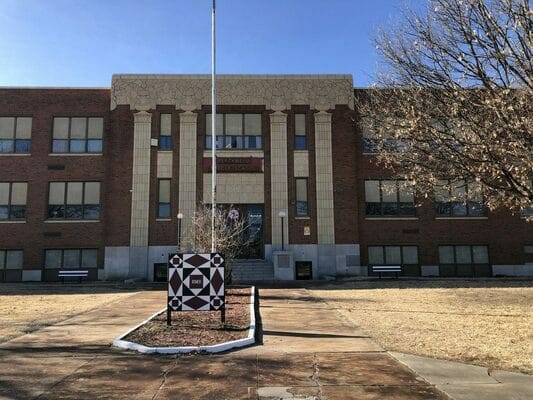 The Blackwell 7th/8th grade Maroons traveled to Fairfax on 10/03/2022 to take on the Woodland Cougars. Blackwell kicked off to open the game, and the Cougars chewed up all but 8 seconds of the opening quarter on back-and-forth penalties, before being forced to punt.

Jude Sappenfield returned the ball to midfield where the maroons set up shop. After a long rush by Boogie Thomason, Braden Smith found the end zone of a 2-yard run. The 2-point attempt was good, giving Blackwell an 8-0 lead. The rest of the 2nd quarter was much of the same with Woodland just burning the clock. Blackwell received the 2nd half kickoff. 2 long runs by Jerry Jurney put the Maroons in scoring position, and Thomason was able to punch it in the end zone from inside the 5-yard line. The 2-point run by Balen Grell was good, Blackwell was up 16-0. On the next Woodland Possession, Blackwell defender Landry Anderson intercepted a slant pass, and Blackwell took over on the Cougar 35-yard line.

A long run by RB Emanuel Ontiveros took Blackwell inside the Woodland 20-yard line. Smith took the next handoff, stiffed armed his way past several Cougars, and found the end zone. Tanner Ward ran in the 2-point attempt, bringing the score to 24-0 Blackwell with 36 seconds left in the 3rd quarter. The next Woodland drive, Anderson recorded his 2nd interception of the 3rd quarter and sped 20 yards into Cougar territory before he was horse-collared down. Blackwell then fumbled the snap on the next play, and Woodland recovered on the Blackwell 44-yard line with 5:10 left in the game.

Woodland was able to find the end zone for their only score of the game on a 31- yard pass. The 2-point attempt was good, bringing the score to 24-8 with 2:42 left in the game. Woodland attempted an onside kick, but it was recovered and returned to the Cougar 45-yard line. Balen Grell then took a QBrun off the right 40-yardsfor another Blackwell score.The 2-point run by Anderson was stuffed and Blackwellled 30-8 with 36 seconds left in the game. This was the last score of the game, and Blackwell left Osage County with the victory.