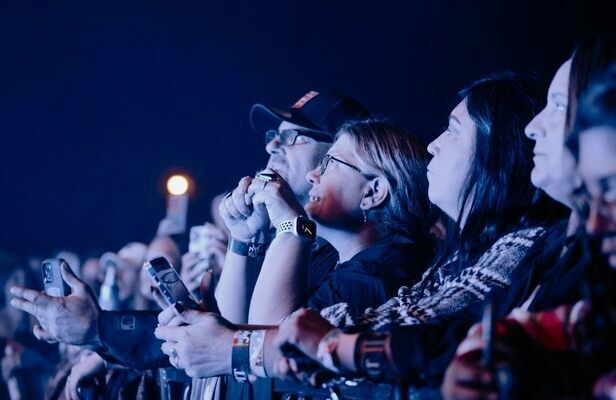 Some of country music’s hottest stars – ones who are burning, ones still smoldering and ones just now catching a flame – were in Blackwell Oct. 8 for the second Top of OK Jam concert at Morgan Field on south Main Street, turning the long-standing Blackwell baseball stadium into a hometown honky-tonk.

While the final tally is still being counted, concert planners estimate that attendance was in the thousands as Oklahomans near and far came to see Casey Donahew, the Bellamy Brothers, Cassy Kendrick, Krislyn Arthurs and Levi Walker perform.

The first concert was during Homecoming weekend in 2021. Going into this year’s concert, there was build-up in the form of a highly publicized chili cook-off at the Blackwell Event Center at the beginning of the year to announce the headliners.

“The first year we did this, it took about four months to come together. It was a much smaller scale than what we did this year, so after we got through it, we all met and went over what we did good and what we could improve on for the next one,” said Dustin Bringham, a spokesman for the Top of OK Jam. “This year’s show took us about 10 months to plan and put together. We added a much larger production.”

Bringham said the meticulous planning paid off for the Top of OK Jam Committee, which runs the event, and everyone involved.

“I think we will continue to grow Top of Oklahoma Jam as long as people are still interested in attending,” he said. “There’s no doubt the benefits this brings to Blackwell and other surrounding communities. Hotels were full. Restaurants were busy. This year, we really monitored our demographics and where our ticket purchases were coming from. Seventy-five percent of our tickets were from outside of Kay County.

“We know we are bringing people to our town and community. Beyond that, having an event like this is always great for people in general. We don’t get a lot of entertainment like this around here, and we’ve tried hard to make this an event anyone can go to and afford.”

Feedback from the talent and the community has been positive. People praised the event on a social media post made by The Journal-Tribune.

“It was my first time going, and I absolutely loved it,” said Rebecca Matthews. “Looking forward to next year’s show! Blackwell needs more events like this. Everyone that was there helping out did a great job. All the bands and musical artists put on a fantastic show.”

Ryan Hood said he had a “blast.”

“[I] came [back to Blackwell] not knowing about the concert. Saw hundreds of folks I hadn’t seen in 20 plus years. I’ll be back next year for sure. Tons of fun and great to see everyone I got to see. For those complaining about things: it was well planned, it was well put on, and it was awesome!”

“People who’ve been to Morgan Field, but not Top of Oklahoma Jam, don’t really know what to expect when they walk in,” he said. “It’s always interesting to see the look on people’s faces when they walk through the gate and see what’s there. I don’t think most folks have experienced being able to watch a big show from the field instead of the stands. It adds a different dynamic than what people are expecting.

“We’ve already had several texts and emails from bands asking to be part of next year’s show, so that tells us we’re doing something right.”

2023 is also on the horizon. So, what does that mean for the event?

“We have been talking about 2023, but we’re still trying to wrap up this year,” Bringham said. “We’ll have our first meeting since this year’s event next week to kind of recap everything, and 2023 will certainly be part of that conversation.”

The Blackwell Veterans of Foreign Wars post had its largest money-making event on record by providing drinks during the event. The Blackwell Fire Department, which hosts a Christmas for Kids Toy Drive, also put up some of its largest numbers ever for a fundraising event.

“We have a bunch great sponsors and volunteers this year,” Bringham said. “Most of them were returning from last year, and we also added a handful of new ones that really helped us out. We’re looking forward to working with all of them again in 2023. We certainly couldn’t put on the size of show we do without them.”