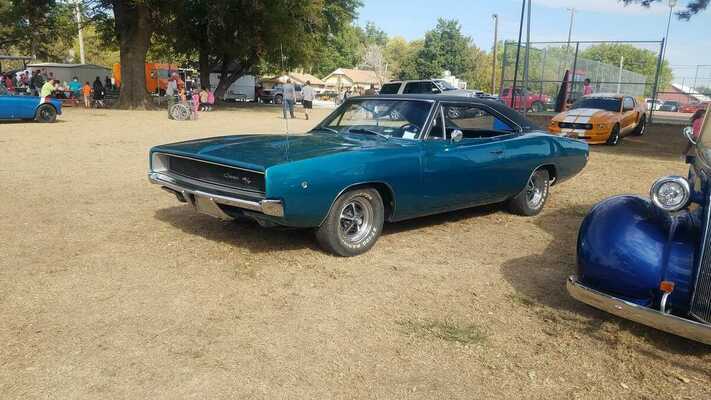 October might be a month of spooky decorations and scary movies, but for Blackwell, it has been a month of community involvement and fun. The month began with Blackwell Tourism’s “Let’s Paint the Town” mural contest, which saw the 100 block of Main Street swarming with artists painting various colorful works on storefront windows.

Both aimed to provide fun, safe activities for Blackwell residents and bring new traditions to the city. The Harvest Festival, which took place at Memorial Park on Oct. 15, raised money for the Kay County Youth Pageant Committee, which will host its second annual beauty pageant in December at the Event Center.

The Harvest Festival raised $2,000. It featured drag racing and a car show. Food and craft vendors set up shop inside the Blackwell Youth Center and at the park.

The event also raised money for the youth center. Nikki Barnes, a director for the committee, said the goal for the festival and pageant was to bring the community together, set a positive example for Kay County’s youth and provide valuable life lessons. Barnes and other members of the committee said they look forward to more events in the future.

Fall-O-Ween, which took place Saturday at the fairgrounds, also featured food and craft vendors as well as costume contests and a haunted house attraction. Shantel Emerine, who put the Fall-O-Ween Festival together, said the gathering aimed to promote community spirit and involvement.

Emerine said it was a windy Saturday, but the turnout was great. She estimated that up to 400 people attended. These events came on the heels of another bigticket event for Blackwell: the Top of OK Jam country music concert earlier in October. It brought in several thousand attendees and was a profitable fundraising opportunity for the Blackwell Veterans of Foreign Wars chapter and the Blackwell Fire Department.

The Blackwell House of Prayer’s “Creations from the Heart” craft show, scheduled for Nov. 5 at the Event Center, is expected to draw a large crowd as the show enters its fifth year.

City Manager Jerry Wieland said he was overjoyed by the events during October. “What an amazing month for the City of Blackwell,” he said.

“With numerous events going on, it has been great to see our community coming out in record numbers to support all of these events. From kids events, concerts, drag racing – and we’re getting to close out the month and go into November with a great craft show. Our community is the strength of Blackwell.”

Sherry Buellesfeld with Blackwell Tourism echoed Wieland’s sentiments. “We are delighted to be a positive and active part of our community,” she said.

“October has been very busy for Blackwell Tourism. On Oct. 8, we had our first ever window mural contest. We were thrilled with the number and the quality of entries. The empty storefronts, thanks to the building owners in the 100 block of Main Street, are now bright and colorful."

“The feedback we’ve received from the muralists, property owners and citizens has all been very positive. The following weekend, Blackwell Tourism was one of the sponsors for the Harvest Festival on Oct. 15, which brought the drag races, a car show and many visitors to Blackwell. This past weekend, the Fall-O-Ween Festival was held here in town, and tourism volunteers served free s’mores during the event.”

In addition to the craft show, November will see an open house at Stillwater Medical Center on Nov. 3.

Blackwell’s Veterans Day parade, led by retired Army Sgt. Sean Ingram, will take place Nov. 11 with a bean feed to follow. In December, the beauty pageant and the annual Night of Lights Christmas Parade will be among the events for residents.