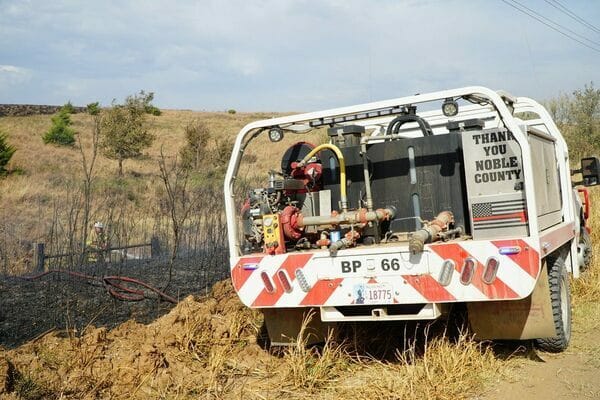 Black smoke filled the northern Oklahoma sky Oct. 22, hours after a wildfire swept across Pawnee and Noble counties. Some firefighters from the region were still on scene. On the back of one fire engine from Morrison were the words: “Thank you Noble County.”

Noble County, like several others across the region, has a sales tax to help fund rural fire departments. Kay County voters will decide whether to pass their own so-called “fire tax” Nov. 8, and fire chiefs say a recent rash of wildfires is further proof that rural fire departments need help.

The tax faces opposition from leaders of the county’s largest city and comes amid nationwide record-high inflation, a key issue for voters heading to the polls for numerous local, state and federal races.

Voters will choose whether to approve a 1/3-cent sales tax that would last six years and is expected to collect around $1 million per year. The Kay County Public Safety Association, which would oversee the funds, would distribute money evenly among the participating fire departments. Departments with ambulance services would receive double. Among departments’ top goals are to pay for equipment and firefighter training.

Blackwell Fire Chief Cory Hanebrink said the two wildfires highlight the need for the county’s fire departments to have better equipment – and more of it. With limited funding streams, purchasing new equipment will be difficult without additional revenue.

“We were only able to respond with two light brush trucks and two heavy brush trucks form Kay County because that’s all the brush trucks we could afford to leave the county with,” Hanebrink said. “We just don’t have a deep resource. … Each department doesn’t have three or four brush trucks like we need to fight large grassfires.”

While fighting the 3,000-acre blaze in Pawnee and Noble counties, one of the Newkirk Fire Department’s two brush trucks failed, and its other truck was in poor condition by the time it returned to the station, Hanebrink said.

“It’s just because our equipment is aging,” he said.

Hanebrink has examined the costs of replacing one of Blackwell’s fire engines, which recently failed a pumping test. The city purchased the engine new in 2001 for about $138,000. A similar engine would cost $440,000 today, he said. That sum is more than half of what any Kay County fire department could expect to receive from the tax during its proposed six-year lifespan, Hanebrink said.

“If you calculate the tax revenues over six years – that’s if we bought one today – we may have $100,000 left to purchase other items,” Hanebrink said. “It would take four years to save to even purchase the truck. By then, that truck may be $600,000.”

Kildare Fire Chief Travis Harris said his department would use funding from the tax for basic training courses and new firefighter protection gear. Much of his firefighters’ bunker gear is 12 years old, two years past its life expectancy.

Additional funding would also help the department apply for grants requiring matching funds and replace some of its aging fleet of trucks, some of which are nearly 40 years old and require high maintenance, he said. Rather than purchasing expensive new trucks, Harris said he would aim to purchase used but reliable trucks.

“Kildare, Oklahoma, doesn’t need a brand-new $400,000 engine, and that’s what a new engine costs, if not more,” Harris said. “We see the need for this money, but we’re not going to go wild with it.”

“The strength of our fire and EMS protection in this county is directly related to the personnel, vehicles and equipment of the fire and EMS that serve,” Wieland said in a statement to The Journal-Tribune on Wednesday. “All emergency services should be raised equally in equipment, gear and training in order to protect the county residences and so that, at the end of their shift, each one of them can come home to their families.

“They deserve the best we can give them.”

Ponca City Commissioner No. 4 Robert Bodick said the tax is unfair to larger fire departments, which handle more fire and EMS calls, but would receive the same amount of money as small departments with fewer calls.

“Rural fire departments need a lot of help, without a doubt,” Bodick said. “The way they’re going about it with this sales tax is not the proper way to do it.”

Bodick said the tax’s goal of providing the same amount of money to each department regardless of its size or the number of calls it answers creates funding disparity. He said he believes fire departments should receive funding proportional to the number of fires and medical calls they respond to, not a flat rate for each department.

He also complained that Ponca City, the largest city in the county, would receive the same amount of funding as departments in smaller towns with little or no sales tax base.

“When you break it down, the funding aspect is not fair,” Bodick said.

The proposed tax is larger than those of some surrounding counties, which use a 1/16-cent tax levy. Bodick also said he believes the tax increase would harm families facing higher costs of living amid price hikes.

The Ponca City Board of Commissioners passed a resolution against the tax, meaning the city will not receive funding from it under current circumstances. He declined to say whether the city would pursue legal action against the public safety association if the tax passes.

Harris and Hanebrink say they are aware of the commissioner’s concerns. However, they say Ponca City has an annual budget for its fire department of roughly $8.1 million, far greater than any other department in the county. Kildare’s annual budget is roughly $20,000, Harris said.

“The idea of this fire tax was to help all the fire departments in Kay County, especially the ones whose budgets after salaries and benefits are less than $1 million, which is everyone but Ponca City,” Harris said.

Hanebrink said he hopes people who are opposed to the tax will vote to help the county’s smallest towns.

“Right now, look at Braman,” Hanebrink said. “They’ve got a very large casino, and it’s kind of hard to fight a casino fire with a brush truck. That’s what Ponca city is asking them to do by not supporting the tax.

“Remember your friends and family that lives in the county that doesn’t have a city fire or EMS agency right there. Help us help you.”