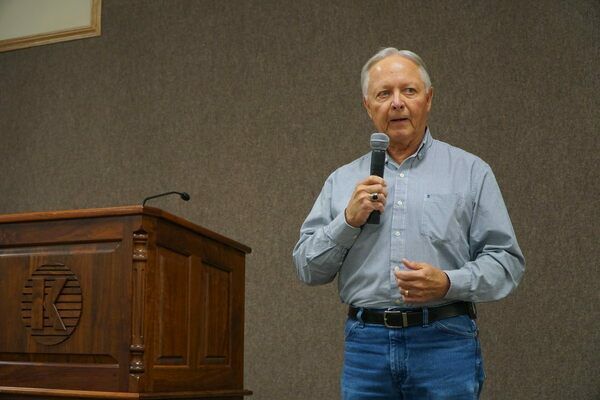 Timothy McVeigh had the open road ahead of him on Wednesday, April 19, 1995, after he bombed the Alfred P. Murrah Federal Building in Oklahoma City. But two stranded motorists and an unsuspecting Oklahoma Highway Patrolman stood in his way.

When retired Trooper Charlie Hanger recounts the story, he gives credit where credit is due.

Hanger, the Oklahoma lawman responsible for arresting one of the most widely known terrorists in American history, spoke to members of the Blackwell Nazarene Church during their annual Thanksgiving dinner at 6 p.m. at the Kay Room on Doolin Avenue. He told the story of how God orchestrated McVeigh’s arrest by putting people in McVeigh’s path exactly when they needed to be there, stopping his escape and bringing the killer to justice.

It all started on the highway.

Temperatures were cool, and weather conditions were calm when Hanger reported for duty at 7 a.m. that April day. He was assigned to patrol highways near Perry in Noble County, about 41 miles south of Blackwell.

He made several traffic stops on Highway 64 that morning before he went to visit the highway patrol’s nearby headquarters on the Cimarron Turnpike. He had submitted a request to transfer to that office, but his request hadn’t gone through.

He was at the turnpike headquarters when he first learned the news: an explosion had destroyed the federal building in downtown Oklahoma City. The cause was unknown. Hanger and other troopers watched on TV as cameras panned across the area, showing burning cars amid the building’s rubble.

“You could tell that it was a terrible event – many people must have been injured or killed, and of course, they were,” Hanger said. “But never at that time did I ever think [it was] an act of terrorism, a bomb. I thought, maybe, a natural gas explosion, maybe a boiler blew up in the building, something like that. But I never thought [it was] a bomb.”

Soon after the explosion, troopers from across the state were dispatched to the capital city – including Hanger. With his squad car’s lights and sirens blaring, he raced down Highway 64 and then Interstate 35 on his way to Oklahoma City.

But before he could get far, his assignment was canceled. He was told to continue working traffic near Perry.

“That’s where the divine intervention first starts,” Hanger said. “I’d been made aware of a possible motorist broken down needing assistance just a short distance north of the Perry exit. So, I proceeded up to that area, and I find two ladies that were broken down in a little minivan. Their alternator was out.”

One of the women was the wife of an Oklahoma City firefighter, and she had heard about the explosion in Oklahoma City, Hanger said. The two women were planning to turn around and head back to Oklahoma City so the wife could check on her husband.

Hanger called a tow truck, and while the three waited along the interstate, little did they know that a beat-up yellow Mercury sedan drove past them.

After the tow truck arrived, Hanger drove north on Interstate 35 to look at the scene of a car accident that took place on a state highway near Billings that Easter Sunday. He responded to the crash when it occurred, and he wanted to see if he could find any more evidence on site.

Hanger raced up the interstate, and when he was nearly a mile away from his exit, he saw the old yellow Mercury that had passed his location earlier – and the car didn’t have a license plate.

“Because I’m going so much faster than [the driver], I look and see that he didn’t have a license plate, but I had already gotten in front of him by the time I could react to what I saw,” Hanger said. “So, I had to slow down, change lanes, and then initiate what I thought was just another routine traffic stop.”

‘MY WEAPON IS LOADED’

Hanger pulled the car over and, as was common practice at the time, ordered the driver to exit the vehicle. The driver opened his door and remained sitting, staring to the west – not the south, where Hanger stood. Hanger again ordered the driver to get out. Finally, the tall, clean-cut, jacket-wearing young man walked toward Hanger. His hands were empty.

Hanger told the driver that he pulled him over because his car had no license plate. The driver appeared surprised.

“He immediately looks to the rear of the vehicle, where the license plate should be, and looks back at me and says, ‘Oh, yes, I knew I didn’t have one. I’ve just recently bought this car, and I haven’t had time to get one.’ Well, because police officers are taught to read body language – nonverbal communication – I thought, ‘If you knew you didn’t have a license plate, why did you look?’ So, I became suspicious that maybe it was a stolen car,” Hanger said.

Hanger asked for the man’s driver’s license. The driver reached into his pocket and brought out a Michigan license bearing the name: Timothy James McVeigh.

When McVeigh reached for his license, Hanger saw the outline of a gun beneath his jacket. At the time, carrying concealed weapons was illegal in Oklahoma. Hanger ordered McVeigh to open his jacket slowly.

“He unzips his jacket, and he starts to pull it back,” Hanger said. “He looks me right in the eye and says: ‘I have a weapon.”

“We get about halfway to the trunk of the car, and he makes the statement, ‘Well, my weapon is loaded.’ So, I nudge him in the back of the head with my pistol and I said, ‘Well, so is mine.’ And we continue on,” Hanger said.

“I thought he was trying to intimidate me. … I see it’s a pistol in an upside holster pointing at his armpit, and I had a death grip on it. I think he was afraid I was going to accidentally discharge his weapon, is why he was telling me his was loaded.”

Hanger placed McVeigh in handcuffs and sat him in the front seat of the squad car. Hanger then searched McVeigh’s vehicle. After finishing his search, Hanger took McVeigh to the county jail in downtown Perry on the fourth floor of the Noble County courthouse.

Shortly after McVeigh was booked in, Hanger was dispatched to work traffic along Interstate 35. He was told to watch for a brown truck with three Middle Eastern men who may have been involved in the explosion at the Murrah building. He stayed on the highway for a while but saw no vehicle matching the description. He went home after his shift ended, and he was set to have three days off.

For the next two days, Hanger watched the constant barrage of TV coverage of the bombing. On Friday, his dispatcher called him and asked him about a Social Security number he had run through the National Crime Information Center database on Wednesday. Hanger recalled that it was McVeigh’s.

“I find out that Tim McVeigh is a suspect in the Oklahoma City bombing, and the FBI wants to place a hold on him immediately,” Hanger said.

Hanger called the county sheriff and told him the news, and at first, the sheriff thought Hanger was joking, he said. Hanger headed to the Noble County courthouse, and by the time he arrived, the FBI had already called the sheriff. Soon, FBI agents were in a helicopter bound for Perry to meet Hanger at the site of McVeigh’s car, which was still along the interstate.

By the time the agents and Hanger returned to the courthouse, media outlets had surrounded the area. Some reporters had already found their way to Hanger’s home, thanks to an “enterprising young man” in Perry who drew maps for reporters and sold them for $20 each, Hanger said. News spread quickly, and the world soon knew that McVeigh was responsible for the worst terrorist attack on American soil up to that point.

McVeigh and his co-conspirator, Terry Nichols, were charged and found guilty of committing the bombing. McVeigh was put to death in 2001, and Nichols continues to serve a life sentence in federal prison.

The timing of McVeigh’s arrest – and the discovery that he was connected to the bombing – normally wouldn’t have coincided as they needed to, Hanger said.

McVeigh wasn’t facing felony charges stemming from his arrest that Wednesday, and he certainly wasn’t though to be a terrorist. He was set to appear before a judge the next day, Thursday, Hanger said. But the judge was busy with a divorce case, so inmate appearances were pushed back a day. That Friday, the judge had to postpone hearings because his son, who was in the school band at Stillwater, missed the bus. The judge had to drive his son to the band event.

“Usually, people get out the next day,” Hanger said. “That has to be divine intervention. McVeigh was still in jail when he needed to be so that a hold could be placed on him by the FBI.”

“Part of that divine intervention was those ladies broke down in that van,” Hanger said. “Had they not been broken down, I would have been on up the interstate taking care of my business. I wouldn’t have seen that yellow Mercury.”

Oklahomans may never forget the toll of the bombing, which shattered families and changed people’s lives forever. People in the crowd Sunday applauded when Hanger finished his testimony by saying, “God bless you all.”

Dayle McGaha, retired publisher of The Blackwell Journal-Tribune, pointed out that Blackwell is among the communities affected by the bombing; Blackwell native Mike Weaver was one of the victims. A memorial to Weaver is on display at the Top of Oklahoma Historical Society Museum.

Hanger acknowledges the hurt that he and others still feel from the attack. Yet even in the midst of the horror the Sooner State felt that April day, justice ultimately prevailed thanks to perfect timing – timing only God could organize, said the Rev. Josie Busby of the Nazarene Church.

“God was in that,” Busby said. “It was a terrible thing that happened, but the way that it unfolded, you could see how the Lord was working in each area.”

Hanger has told the story countless times through the years. But it doesn’t grow weary. Telling people about God’s intervention is just as important today as it’s ever been, he said.

“I believe it drives home the point that it does happen, and it has happened, and it will continue to happen,” Hanger said.