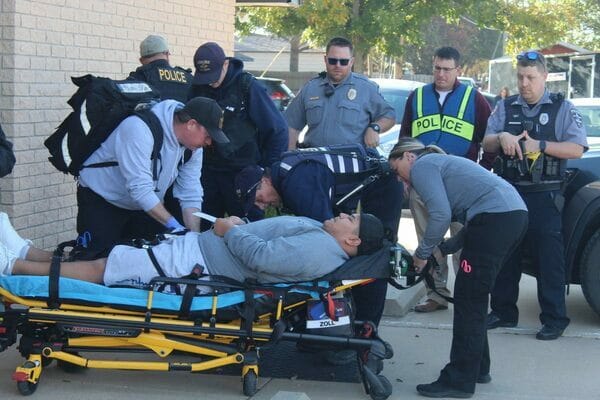 This was the made-up scenario:

A Sunday morning church service at Blackwell’s Immanuel Baptist Church was the target of a lone gunman who shot several members of the congregation. Seven people were taken to Stillwater Medical Center-Blackwell, and others were flown out or transported because of the severity of their injuries.

On Nov. 2, the City of Blackwell, the Blackwell Police Department and Blackwell Fire & EMS used the church on 13th Street as the site of an extensive “mass casualty training,” a mock event that simulated a shooting at a local church during a busy Sunday service.

At 9 a.m., students from Northern Oklahoma College’s Criminal Justice Program were given their roles. City Manager Jerry Wieland and Chief of Police Dewayne Wood briefed the students before they took their places throughout the church.

Some hid in rooms, others screamed in pain, some were unresponsive and the rest writhed in fright.

Available ambulances from as far away as Arkansas City, Kansas, sped in to help treat and transport the wounded.

They began working with emergency management crews from Blackwell, Arkansas City, Miller EMS, Wellington, Ponca City, Tonkawa and Newkirk to extract the victims. The victims were taken to both Stillwater Medical Center-Blackwell and a secondary location.

“This exercise was designed to test our abilities to handle a mass casualty event and overload our hospital to test the limits,” Wieland said. “Multiple agencies from the surrounding area responded to provide a real-world response in the event this was to happen here in the city limits.

“I cannot thank all those involved enough. Events like this take a lot of planning and coordination. All

involved dedicated their knowledge, time, equipment and personnel to make us better prepared for any type of mass casualty event.”

“It’s a regulatory requirement that once a year we do drills like this, and the cooperation through the county and beyond was amazing,” Moore said. “There was a lot of moving parts.”

“I want to recognize April Edgar, our charge nurse downstairs,” Moore said. “It helps our staff to be prepared for a mass casualty event. We treated 10 injured. One was evacuated by helicopter, and two were transported out to another hospital.”

During the summer, Holt hosted an event training hospital staff to respond to an active-shooter situation.

During the Nov. 2 training scenario, Holt and other employees were staged around the hospital to practice crowd control, Moore said.

“We role-played a lot with that,” Moore said. “We worked out different scenarios, like parents trying to push through, friends, family – we worked on de-escalation in regards to that.”

The decision to set the scenario during a Sunday morning church service was for several reasons, Wood said. On a Sunday, many emergency service workers and administrators likely would not be at work and would be home or out of town.

By setting the scenario in that context, it forced first responders to work with different variables, such as agencies and medical services not being as heavily staffed as they would on a weekday, including the hospital.

“The exercise went well,” Blackwell Fire Chief Cory Hanebrink said. “Overall, it was a 100% complete success. Getting that many people together in training is good for community.”

“In the last few years, first responders have learned lessons from many tragic events, including the importance of timely care of injured victims and the efficient coordination between law enforcement, fire and EMS,” Wood said. “So, these real-life training scenarios are important.

“We were able to see some very good things come out of Wednesday’s training – specifically, teams of emergency responders from different communities working together to quickly and safely get medical help to people who are seriously injured. The last several years, Kay County first responders have taken proactive steps, like law enforcement and fire/EMS training together in scenarios like this, to be prepared for such an event.

“The purpose of this training was to identify the strengths and weakness in case of a mass casualty event in our community, and I think we did that. I would like to thank all those who participated in Wednesday’s drill. I feel blessed to have the opportunity to work in a county where agency leaders are committed to working together to provide improved services to all citizens in Kay County.”