YELLOWSTONE Season 5: How do I watch this thing? And how good is it so far? 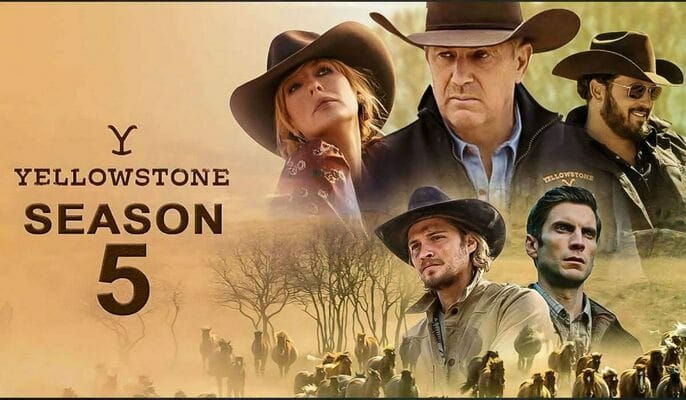 TV’s #1 show, “Yellowstone” is back for its climactic fifth season on The Paramount Network and the most burning question isn’t “What are the Duttons up to now?” but rather… “how the hell do I watch this show?”

If you have DirectTV or most providers, Paramount Network is available to you in most packages so there’s no further work to be done.

However, in the digital age where most have forsaken cable, it gets a bit messy.

You would think that it would be as simple as getting the Paramount streaming service, Paramount+.

A long time ago, before Paramount had their ducks in a row with the poorly named “CBS All Access App” that would become “Paramount+” that now hosts a plethora of original and network content, they had sold the streaming rights to Yellowstone to NBC / Universal for their Peacock streaming service.

Peacock DOES NOT do “next day” streaming for the new season of Yellowstone.

Peacock DOES NOT have the Yellowstone spin-off series “1888” or the forthcoming “1923”. These two are Paramount+ Originals.

So the only way to stream the new episodes in Season 5 after the season airs is on Peacock. Older seasons of the show are available there and NOT on Paramount+.

Alternatively, the Paramount Network channel is available through Hulu’s “Hulu+ Live TV” package as well as SlingTV and Philo.

So the only way to watch the new episodes via streaming (the day after they air) is the PARAMOUNT NETWORK APP which is NOT the same as Paramount+.

The Paramount Network App can be accessed via signing it through a TV provider which currently includes your typical providers as well as BluePeak which is available in Blackwell.

The episodes can also be bought in bulk via Amazon Prime or iTunes.

So, for those that watched the two-episode premiere on Sunday night, how was it?

I have said my peace about season 4 of Yellowstone which was by far the laziest season of the dramatic series so far, but I cannot blame the writers or cast on that.

It was very clear that Season 3’s climactic finale (John getting shot and war coming to Montana) was rushed and snuffed out in Season 4 due to COVID filming restrictions.

I mean, the whole thing just amounted to an entire season of Jimmy’s cowboy antics, Rip and Beth adopting a kid, and Casey going on a vision quest while the entire “DALLAS” inspired “Who shot John?” plot was just meekly resolved as being Jaime’s delinquent father.

I’m happy to say Season 5 seems MUCH more coherent, and it feels like we’re getting somewhere again.

There’s a humanity and a sense of failure to John Dutton as he grapples with his new position as Montana’s governor and seems unsure of how to play the political game while Beth watches as he attempts to “destroy” the Dutton legacy by being dead-set on placing the ranch and land in a conservation chokehold.

We also finally have the return of the Broken Rock Tribe with its own power-struggle brewing between Chairman Rainwater and the hot-to-trot Angela Blue Thunder who seems to be moving against Rainwater for keeping John too close as an ally and not as an enemy.

The inter-tribal politics of Yellowstone seemed to really be amping up going into Season 4 before being tossed aside the entire season, and it is a shame because that is one of the show’s more interesting subplots. We have been with Rainwater since the beginning of the series, and it seems that plot is finally getting the justice it has long-since deserved.

My only “complaints” about Season 5 so far seems to be the show not knowing what to do with Monica and Tate, Casey Dutton’s wife and son. They have been kidnapped, beat up, almost murdered, and yet they feel stagnant which is a sharp contrast to what we have seen Casey go through as a character.

Maybe that will change, but I sincerely hope we don’t get yet another season devoted to Casey and Monica nearly separating only to come together again. Rip and Beth they ain’t.

Another small issue I have is the Market Equities real estate company. Yellowstone has blown through so many “corporate badguys” that it feels stale at this point to keep them around, especially with the lead antagonist Caroline Warner becoming a screaming Batman / James Bond villain.

Now she has recruited the show’s third or fourth attempt at an “Anti Beth” character Sarah Atwood, a venomous corporate hit-woman who is bent on seducing and “turning” Jamie against his family. Again.

Either give Sarah and Jamie something meaningful or don’t do it at all. Regular Beth is bad enough (in her own way) that she deserves to be fleshed out more as the antagonist the show seems hesitant on truly turning her into.

I know it seems like I am complaining, but Season 5’s start was very good. We got to see Josh Lucas back in a flash-back as young John Dutton, and we got some very Taylor Sheridan-esque musings from Rip about Emperor Nero playing the fiddle as Rome fell. The sub-plot about the wildlife park’s wolves also seems to be going somewhere interesting, giving the Bunkhouse boys something meaningful to do again.

And, as previously mentioned, it seems like this season will be the strongest in terms of John Dutton’s character and newfound power as Governor.

I have said it before but Yellowstone is at its strongest when it is chock-full of Sheridan’s neo-western philosophical writings and postulating on ways of life and death, which made “1888” and, I’m sure, “1923” so damn good.

So what did you think of the new season of Yellowstone so far?