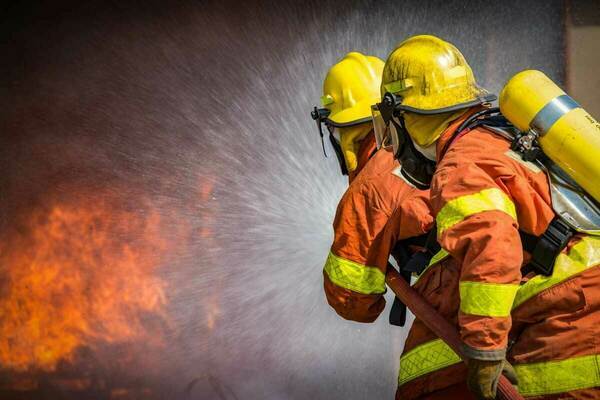 With the election behind them, Kay County firefighters are ready to hurry up and wait for sales tax revenue to roll in.

HOW THE PROCESS WORKS

Getting new firefighting equipment will take time, as the process of collecting sales tax revenue – and then saving up enough to make purchases – takes a while.

The Oklahoma Tax Commission collects sales tax revenue each month and distributes that revenue back to city and county government entities between six and 10 weeks later.

The tax is expected to bring in about $1 million per year. The board will hear requests from county fire departments wishing to purchase new equipment, and the commissioners will vote whether to approve or disapprove those requests.

Before a request is made to the commissioners, however, fire chiefs will present their requests to the Kay County Public Safety Association, the group of county fire officials tasked with analyzing requests to use money from the tax. The group will ensure that tax money is spent as wisely and efficiently as possible, Kildare Fire Chief Travis Harris said.

“The peer review will make sure they’re not wasting the taxpayers’ money,” Harris said.

“Kildare is not going out there and buying a new $600,000 engine when we don’t need a brand-new engine.” Any gear or equipment fire departments purchase with tax funds will be county property. However, the fire department will be able to use the equipment as its own, and whenever the equipment is sold as surplus years later, revenue from the sale will be allocated to the same fire department. Kay County’s sales tax, and the process for allotting and spending funds from it, closely mirrors a public safety tax in Noble County, which has been in effect for about 20 years, Harris said.

The tax will allow county fire departments to pay for new equipment, training and basic expenses such as fuel and insurance. Smaller departments like Kildare, which has a limited funding stream and an annual budget under $30,000, will benefit greatly, Harris said.

Among his department’s top priorities are purchasing new protective clothing called bunker gear. Most of the department’s gear is out-of-date, Harris said. He’ll also eye repairs and upgrades to the department’s existing fleet of fire trucks, and he hopes to purchase a used but well-maintained truck for fighting brush fires, he said. The tax will also benefit larger fire departments like Blackwell.

The department will be able to enhance its municipal funding to purchase new vehicles, which have seen staggering cost increases in recent years, Blackwell Fire Chief Cory Hanebrink said.

Once enough funding from the tax is saved up, Hanebrink said he intends to purchase new SCBA gear, which is the breathing apparatus firefighters wear. He also intends to replace the city’s Engine No. 10, which recently failed a waterpumping test.

Funding from the tax can also help departments apply for and receive state and federal grants. Many grants require matching funds, and tax revenue can be used for that purpose, Harris said.

The tax faced pushback from the leaders of Kay County’s largest city, Ponca City, as officials complained that the distribution of funds would favor smaller departments. Ponca City Ward No. 4 Commissioner Robert Bodick, whose Facebook post in opposition to the tax went viral, declined to comment on the vote.

The JournalTribune called Ponca City City Manager Craig Stephenson on Friday, and that call was not immediately returned. Ponca City’s fire department and EMS service will not receive tax revenue because the city opted out of the program.

The tax also faced last-minute opposition from the City of Tonkawa, which had earlier lent its support to the tax effort. However, on Oct. 27, the City Council passed a resolution against the effort, saying the county should fund fire departments in other ways, according to the city’s resolution. The city will still receive funding from the tax, however, because the resolution did not cancel the city’s involvement in the program, according to TheTonkawa News.

Hanebrink and Harris thanked voters for turning out and said they believe the tax will yield dividends for residents. “I would just like to thank everybody for going to the polls and voting, not necessarily for or against it, just going out and voting,” Hanebrink said. “We appreciate all the support.” Harris added: “We are very pleased and glad the residents of Kay County saw the need, and we are glad they supported. We appreciate the show of support.”