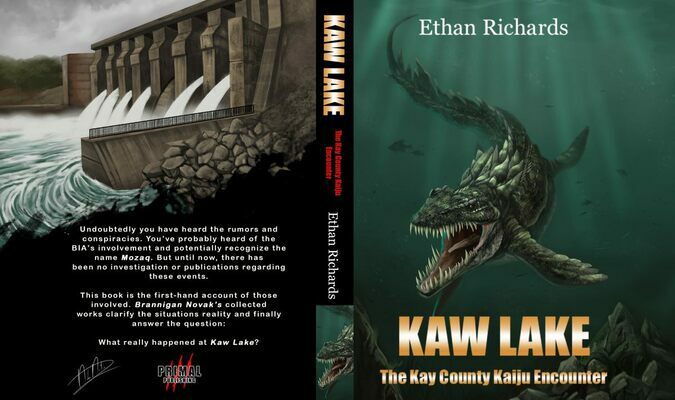 There’s a monster in Kaw Lake. Tribes of elves and orcs are roaming across Oklahoma. There’s a world of adventure with the Sooner State as the stage in local author Ethan Richards’ works, such as his “Dark Lord of Oklahoma” trilogy and his upcoming “Kaw Lake” paleo-thriller.

Richards is a 2005 Ponca City High School graduate who attended college at the University of Central Oklahoma on a U.S. Army ROTC scholarship. After college, he entered the Army as an officer for six years before transitioning into the National Guard and pursuing a career in law enforcement. Richards’ first work, “The Dark Lord of Oklahoma: An Unconventional Story,” technically started its life when he was in high school.

“I started the first draft when I was 16,” he said, “and as I’ve grown older, so has the work, and it has evolved a lot. I didn’t want it to be a gimmick, really.” Richards was inspired by J.R.R. Tolkien’s works, including “The Lord of the Rings” and “The Silmarillion” as well as H.P. Lovecraft.

“I loved Lord of the Rings as a kid, and [Lovecraft] who does have a problematic history, and so I was influenced by parts of both as I formed the story,” he said.

“Lovecraft’s works often deal with an archaeologist or an expedition finding and unearthing some cursed artifact, which is similar to what happens here. It’s like, ‘What if Sauron escaped Middle Earth’ and ended up through a portal right into Oklahoma, of all places?”

“The Dark Lord of Oklahoma” plays off of Richards’ fascination with fantasy as well as his love for Oklahoma and the potential of Oklahoma’s old ghost towns as settings.

The novel follows Elena Doolin, a high school teacher in Henryetta who gets embroiled in a conflict between the high school fantasy-inspired creatures known as “The Sons” and a rag-tag group of veterans, misfits, and outcasts calling themselves “The Nomads,” who make it their mission to defend Oklahoma against the other-worldly threat.

Described with dashes of steampunk, urban and rural fantasy, the novel became a success online with 4.4./5 stars on Amazon, five stars on Barnes & Noble and 3.8/4 stars on GoodReads. It spawned a sequel, “The Dark Elf of Oklahoma,” which launched in March.

A third installment is on the way as well.

While his fantasy series spans all across Oklahoma, taking advantage of the state’s many small towns, ghost towns, cities and geography, Richards’ next novel, “Kaw Lake: The Kay County Kaiju Encounter,” is a bit closer to home.

Richards said he was overjoyed describing the book, which is as much of a love letter to the epistolary horror classics that inspired him, such as Mary Shelley’s “Frankenstein” and Bram Stoker’s “Dracula,” but also a way to tap into modern horror classics like Max Brooks’ “World War Z” and “Devolution.”

Above all else, it portrays Oklahomans (namely Kay County residents) in a specific light.

The novel, told in “epistolary” form through letters, transcripts and other forms of correspondence to simulate a real-world “documentary” approach, presents the fictional happenings as a non-fiction account.

“I grew up around Kaw Lake, so I have a lot of nostalgia for that,” he said. “I know people from the area do, too, so I want to tap into that as well as to explore how a giant monster scenario would play out on a lot of levels from the people witnessing it to the bureaucracy trying to manage that.”

In the 2016 film, Godzilla’s rampage and devastation of Tokyo is told through the eyes of Japanese government representatives, municipal workers, first responders and everyday citizens, grounding the fantastical film in a “real world” context influenced by the original 1954 Ishiro Honda “Godzilla” film.

It is devoid of giant monster battles and spectacles and instead focuses on the horror and ramification of such an event.

Richards said the difference between writing a more straight-forward narrative novel like his “Dark Lord” series as Kaw Lake was a fun challenge.

“I’m still putting the final touches on [Kaw Lake],” he said. “I’m working on the craft, the dialogue, the different ‘voices’ within that,” he said of his dedication to the epistolary form. “Kaw Lake” will mark Richards’ first time with Primal Publishing.

Working with Primal’s founder Michael Esola, Richards said he is certain that the next explosive genre will be the “kaiju” or “giant monster” subgenre.

“You saw comic books go from being a “kids only” thing to this massive machine where it is now,” he said. “It had its renaissance in the 1980s, and it’s been unstoppable at becoming something that is accessible to a wide range of audiences. I think the kaiju genre is next, in terms of people realizing there’s a lot of different types of stories to be told there.”

Richards cited Steven Spielberg’s iconic “Jaws” as a key example, 2016’s aforementioned “Shin Godzilla” and the recent success of Max Brooks’ 2020 horror novel “Devolution” about the fictional “Mt. Rainier Sasquatch Massacre” as ways that the genre of “monster attacks” can be for adults as well.

Brooks’ novel is getting the big-screen treatment from Legendary Films.

On writing, Richards said it is something that “anyone” can do. “I originally self-published,” he said.

“Then I worked with Peter Biadasz at Total Publishing in Tulsa. I learned a lot from him. Authors can be great at writing and not so much at marketing, so it’s important to grasp that as well. You can have an amazing book, but no one will know that if you don’t know how to market that and how to get it out there in a tangible way.

“It can be daunting for some people to even think about writing, you know? Like fantasy, people might think they need this huge outline for world-building and everything. But I think if you sit down and just start writing, it will all come to you. The world will explain itself. It will build itself. That’s really the most important step – just start writing.”

Richards said many aspiring authors might seem overwhelmed at intricate multi-page outlines, but that he belongs to the school of “pantser” writing, which is a term coined in the world of fiction to describe authors who write “by the seat of their pants.”

“Planning is a big part of writing,” he said. “But plans fail. Just start with your basic story, start writing, and soon that story will take on a mind of its own. You might not even know where it’ll be taking you, but what matters is letting the story speak, breathe and evolve.”

“The Dark Lord of Oklahoma” and “The Dark Elf of Oklahoma” are available on Amazon Prime and Barnes & Noble through print, eBook or Kindle editions. “Kaw Lake: The Kay County Kaiju Encounter” releases Nov. 30.