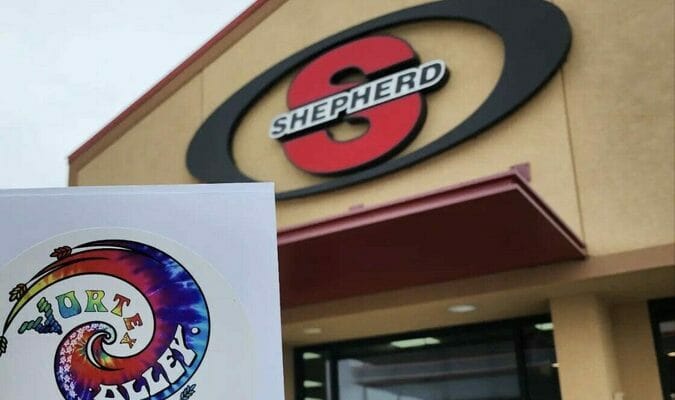 A Ponca City brewery is expanding thanks to a Blackwell business.

David Thomas, a co-owner of Vortex Alley, said the deal was one big, happy, case of coincidence.

“I was on our patio at Vortex, and one of our customers asked why we don’t have our beer at the Shepherd’s convenience stores,” Thomas said. “I know they have a yard here, and I always see their trucks around – beautiful trucks, by the way – and I know of the gas stations, but I just had no idea they were even based in Blackwell. So, I went to Blackwell.”

“I spoke with Jeremie, and he had no idea that there was a brewery in Ponca,” Thomas said with a laugh. “So, we all found out about each other. I brought him some samples, and he thought it was an excellent chance to support a local business. So, at the end of the day, it’s these two local businesses working together, which is awesome.”

Vortex has Blackwell roots as well, Thomas said, as one of its co-owners is from here. Vortex is owned by Jimmy Allen, Marc Spaulding, Jason Snyder, and David Thomas.

The Ponca City-based brewery is spreading far and wide. Its beer is being carried at liquor and retail stores in Ponca City as well as area bars and restaurants, including Chilis and the Rusty Barrel in Ponca City and the Rock & Brews Casino in Braman

Vortex beers also are being sold in Oklahoma City, Edmond, Bartlesville and Enid.

“We couldn’t have predicted where we’d be five years ago when we opened,” Thomas said. “We just had our fifth anniversary in November, and we’ve got a lot of great things coming.”

Vortex is preparing for a pub crawl, which will raise money for charities and food banks in Ponca City on Dec. 17.